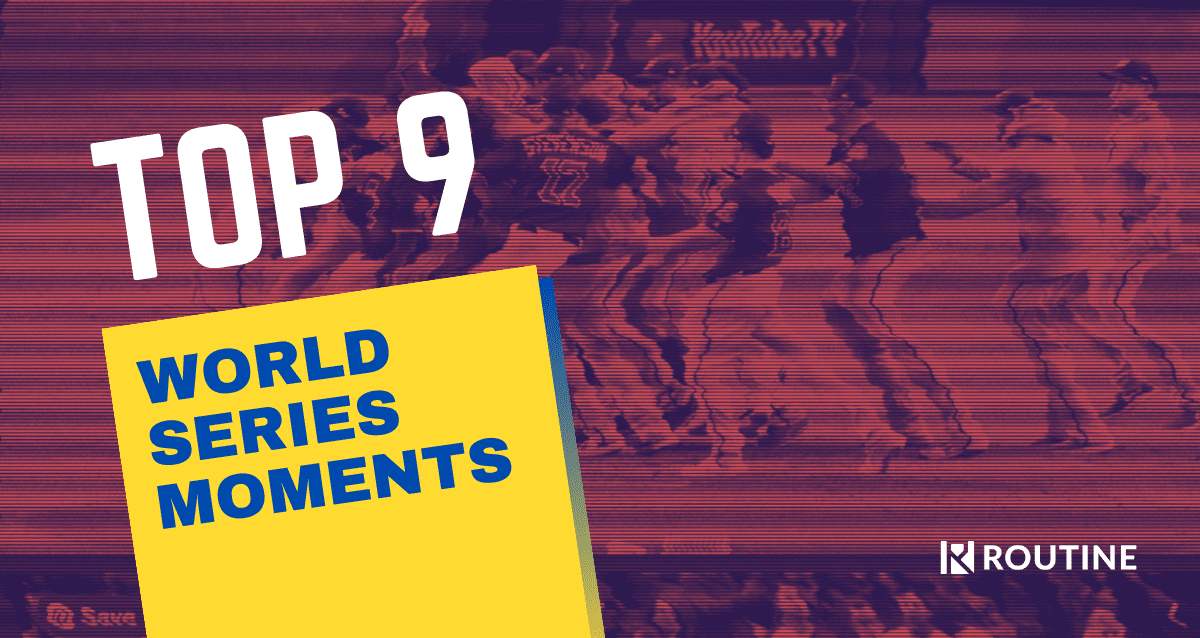 After last night’s insanity between the Rays and Dodgers, we decided to compile a list of the greatest World Series moments in baseball history.

In case you missed it… You’ve gotta see the unbelievable World Series moment from last night.

“I don’t believe what I just saw.”

In the land of stars, one reigned supreme on a fateful October night in 1988. Facing off against future Hall of Fame closer Dennis Eckersley, the noticeably-injured Dodger slugger, Kirk Gibson, hobbled his way up to the plate as a pinch-hitter with two outs in the bottom of the 9th. The Dodgers had a man on second as they trailed the A’s by a run. It’s painful to even watch as Gibson fouls off different offerings from Eckersley. He couldn’t push off his left leg nor land on his right. Limited to an “arm swing” Gibson loaded up on the two-strike pitch and connected. The ball traveled deep into the Los Angeles night as the world watched Kirk Gibson do the unthinkable.

“Willie Mays just brought the crowd to its feet with a catch that must have been an optical illusion.”

During the 8th inning of the first game in the 1954 World Series at Polo Grounds, the Say Hey Kid decided it was time to put his stamp on the series. Runners led off first and second as Vic Wertz drove a ball deep to centerfield. Willie Mays turned his back to cover the necessary ground but was unable to square himself back to the ball as it rapidly descended. He quickly reacted by arching his head back, securing the ball with a basket catch at his waist, and forever submitting his legacy with “The Catch.” A final note on this play, and maybe the most important, Mays hurled the ball back into the infield to keep either runner from advancing. The Giants went on to win the game and the series.

“The Catch” During Game 1 of the World Series

In what has been called the “Greatest World Series Ever Played” by ESPN, the 1991 World Series had everything you could ever want. Both the Atlanta Braves and the Minneapolis Twins had finished the 1990 season in last place of their respective divisions. Neither was void of talent, but most pundits wrote off their title chances before the season began. Unimpacted, both teams scrapped and fought their way to winning a pennant and playing for a coveted World Series title. The Braves held a 3-2 series lead as the two teams squared off in Game 6 inside the Metrodome. The game rolled deep into the night as it extended into extra innings. With the game tied at one in the bottom of the 11th, Charlie Leibrandt served up what would become Kirby Puckett’s greatest moment. The Twins went on to win the series in a pitcher’s duel between John Smoltz and Jack Morris.

“And it gets through Buckner!”

It’s been well-documented throughout the years. Leading the heavily-favored New York Mets 3 games to 2, the Sox scored two runs in the top of the 10th inning. Just three outs away from a long-awaited World Series title, Boston manager John McNamara chose to let the injured Bill Buckner stay in the game for the bottom half of the inning. This is notable because in games 1, 2, and 5 of the World Series McNamara had lifted Buckner for a defensive replacement. The stage is set. Toting a two-run lead with just three outs to go, the Red Sox sat on the verge of breaking the “curse” when the unthinkable occurred… The Mets rallied to tie the game with three consecutive singles. With the game tied, Mookie Wilson hit a slow roller up the first baseline and through the legs of Buckner. The Mets won the game and the series. Sox nation would have to wait nearly two more decades before they would lift the curse.

“A no-hitter, a perfect game in the World Series.”

Can you imagine taking the rubber for a World Series game? It’s impossible to think about the emotions that go into that. Now take it to another level. Think about taking the rubber in the 9th inning of the World Series having never thrown a pitch from the stretch. 24 up, 24 down. You’ve got a perfect game. Over 150 years of baseball have passed and only 23 have ever been thrown. The magnificence of Don Larsen’s Perfect Game during Game 5 of the 1956 World Series cannot be overstated. While we don’t have many personal accounts of his dominance remaining, this is a World Series moment that will live forever.

Vin Scully Was on the Call!

Full generations of people passed waiting for these historic teams to win a title. While there isn’t one defining moment from either World Series that stands on the same level as the rest of the list, we knew we had to give a shoutout to the ‘04 Red Sox and the ‘16 Cubs for putting a long-overdue rest to the Curse of the Bambino and the Curse of the Billy Goat/Bartman.

It's over, the Cubs have finally won it all!

“We will see you tomorrow night”

For starters, how cool was it that Joe Buck was able to use his father’s legendary call of Kirby Puckett’s World Series Game 6 walk-off home run to call David Freese’s World Series Game 6 walk-off home run 20 years later? Baseball is so cool. But what makes this moment so special is what Freese did earlier in the game. Facing Neftali Feliz with two on and two out and his team trailing by two, Freese was down to his final strike when he sent a 98mph fastball deep into right field. Nelson Cruz (not an elite defensive player) was unable to catch the ball as two Cardinals raced around the bases to tie the game and save their season. The game remained tied until Freese came up again in the 11th. Leading off the inning, Freese turned a 3-2 pitch into his own unforgettable World Series moment.

Just 6 years into the franchise’s existence, the Arizona Diamondbacks faced off against the game’s most prestigious foe. Coming off three consecutive World Series titles and four of the past five, the New York Yankees looked prime for another championship. They had Jeter, Posada, Clemens, Williams, Rivera, and a whole bunch more. Over the past three years, they had a combined World Series record of 12-1. They were set to steamroll anyone in their way. But as the series progressed it became obvious that they were in for a fight. The Diamondbacks had Randy Johnson, Curt Schilling, and a lineup of dirt dogs. The series went the distance as the world cheered on the upstart D-Backs. However, the Yankees were able to hold a lead entering the bottom of the 9th. With goated closer Mariano Rivera needing just three outs, the fairytale seemed to be over for the team from Phoenix. Not so fast. The Diamondbacks staged a rally as they tied the game. The bases remained loaded as their best hitter, Luis Gonzalez, stepped up to the plate. Color commentator, Tim McCarver, made one of the greatest calls of all-time as he noted lefties often bloop hits against Rivera’s cutter. Two pitches later Gonzalez followed through with a bloop of the head of Jeter as the dynasty came to an end.

“I’d play for half my salary if I could hit in this dump all the time.”

Arguably the most dominant player in sport’s history put his confidence on full display on the game’s biggest stage. 16 future Hall of Famers participated in the 1932 World Series as the Yankees swept the Cubs in four games. Before Game 3, Babe Ruth and Lou Gehrig put on a hitting exhibition in front of a crowd of 50,000 Chicago fans. Ruth sent nine balls into the bleachers/Waveland/Sheffield Ave. while Gehrig launched seven more. Ruth was then quoted as saying, “I’d play for half my salary if I could hit in this dump all the time.” Ruth came up in the first and sent a deep home run into the right-center bleachers at Wrigley. Gehrig then hit one in the top of the 3rd to give the Yanks a 4-1 lead. Buzzing with confidence, Ruth came up again in the 5th. During his at-bat, Ruth gestured to the outfield bleachers with his bat. It might be ambiguous as to what this really meant, but nonetheless, the Sultan of Swat hit the following pitch over 500’. Gehrig actually followed this moment up with another home run of his own, but the message had already been sent. The Cubs were no match for The Great Bambino.