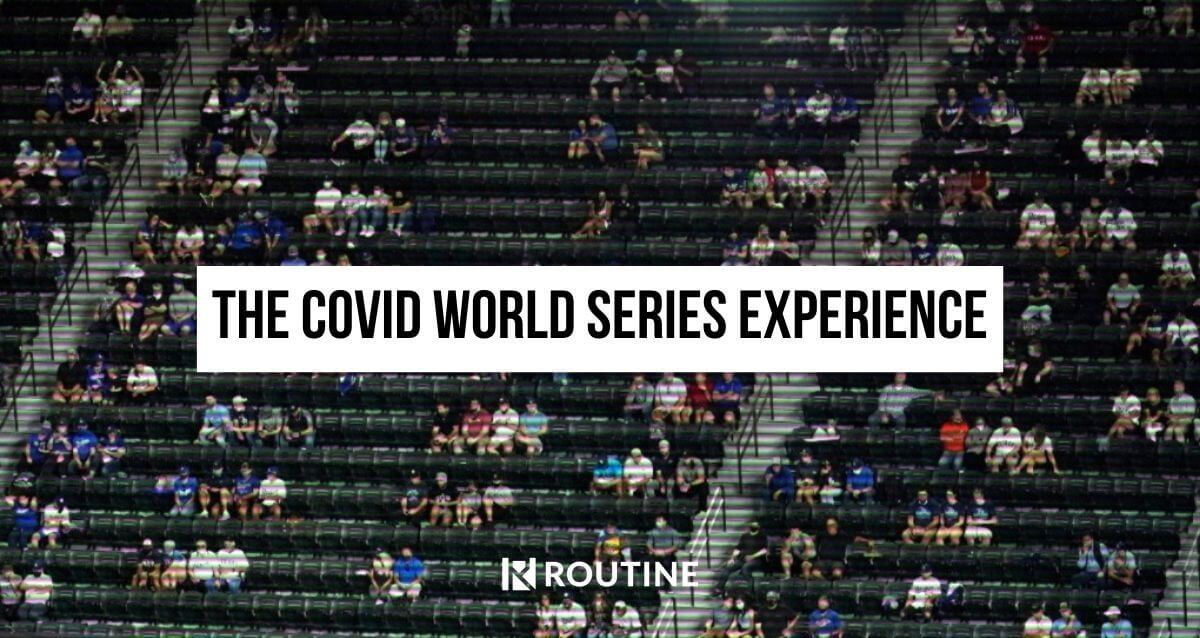 I was lucky enough to attend games 1 and 2 of the World Series and I want to share my experience with everybody since this could potentially be how baseball is next year with fans. When they announced that fans were allowed to attend the NLCS and World Series games my family and I made the decision to attend the World Series, no matter who was in the series. At the time there were still 8 teams involved, and with a majority of us Dodgers fans we liked our chances of being able to watch them in Arlington. We were able to snag a pod (group of 4) for games 1 and 2 for a very reasonable price considering the premium of tickets that were sold.

Walking into the stadium was no different, you still have to wait in line (a very small one), and you have to empty out your pockets to go through the metal detector. You were not allowed to bring in bags or backpacks of any kind, so that I saw really threw people off. Especially since most people traveled so they either took an Uber to the stadium or one of the many shuttles they weren’t able to just walk back to their car to drop off. The security at the front gates would still inspect anyone who may set the detector off but they weren’t allowed to search bags due to COVID, hence why no bags were allowed. Walking in was a bit strange to see hand sanitizer stations throughout the stadium and pretty much every corner you look there is a sign informing you of the COVID protocols, explaining how to properly wash your hands, and showing you the proper way to wear a face covering. In an atmosphere like the World Series there is usually more of the sentiment when you see another fan of your team by giving him a high five or pat on the back, there was definitely none of that really displayed in which I saw, nor did I want to partake.

Obviously the biggest difference in attending this baseball game as compared to others was the facial covering requirement. Unless you were drinking or eating then you were asked to wear your covering at all times, and if you thought no one was looking and tried to keep it down they had ushers regularly walking up and down the aisles pointing out those who were not abiding by the rules. When we went to sit in our seats we had the aisle of the row both times. We had our 4 seats available and the rest of the seats in the row that were not in use were ziptied closed. The closest people to us were either two rows ahead of us or two rows behind us. Anyone in the row in front of us or right behind us had their seats in the middle of the row, as opposed to the aisle. I will say having no one in front or behind you is not the worst thing to have at a game. The extra leg room in front and not having to worry about blocking anyone's view in case you wanted to stand during any intense part of the game were actually nice.

There were no hot dog or peanut vendors walking up and down the aisles for convenience but with the limited people allowed you didn’t have to spend an entire inning in line for a hot dog or a drink. The longest I waited was maybe 2 minutes to get a drink because while there are less people, that means that less of the food and drink stands were open as well. When it came to what was available for you to eat or drink that was not limited as the Rangers offered their full array of items, including the massive 2 foot hotdog that looked bigger in person than it does in the photos.

What was the actual game like? Well the World Series is the World Series, it’s the biggest stage in baseball and especially being there to watch your own team there was no denying our excitement and intensity during every pitch. Unfortunately, it really didn’t get to feel like a World Series game, it felt more like a normal night game between the Dodgers and the Rays. Don’t get me wrong, there were fans of both teams and I would say made up about 70% of the population, but 11,500 fans can only get so loud to make up for the missing 30,000 people who could have also attended. And when Mookie hit his homerun and the Dodgers went off in Game 1 you could feel the excitement from the fans. And when the Rays fought back in Game 2 then you could hear how loud the Rays faithful were. But it never truly got that same feel to it. I attended Game 6 of the 2017 World Series at Dodger Stadium and I could feel the chills and excitement from the moment I walked into the stadium until the last pitch of the game. I never truly got that feeling watching the game, only the normal nerves you get watching your team on the big stage.

If this is what baseball is like in 2021, sort of like how the NFL has done so now, I would not deter anyone from attending a game. I felt safe the entire time I was at the game; it takes everyone’s part to wear a mask and maintain the proper distance to allow teams to have fans. I hope that this isn’t what baseball is like next year because we can be able to quiet this pandemic, but if you get a chance to attend a socially distanced baseball game and get to cheer on your team, it gives you quite a bit of happiness and normalcy for the 3+ hours you are there.