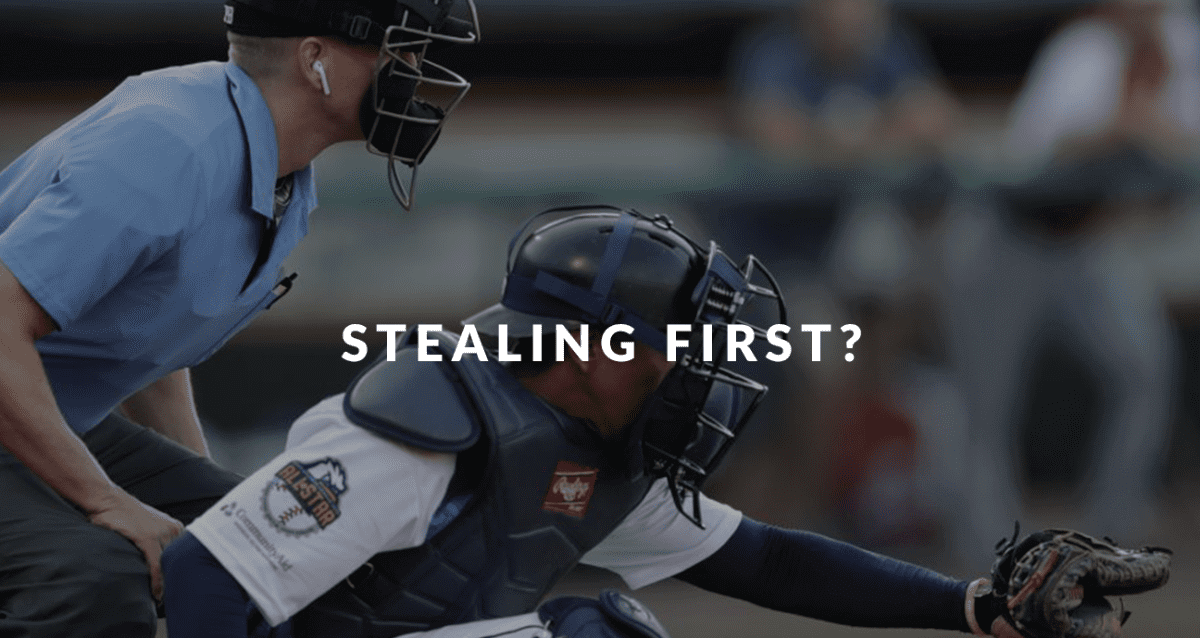 Over the last few years, Manfred and the MLB have been trying to find new ways to keep people engaged and have more action in the game. Some have speculated, MLB players included, that the balls are juiced to allow more offense, which they believe is what baseball viewers want to see. They are tinkering with a pitch clock in between pitches, after implementing a pitch clock in between innings and for pitchers coming out of the bullpen. The Atlantic League, which is known as the guinea pig of the MLB, has now added a new addition to the game: stealing first base.

How does one steal first base? On any pitch during an at-bat that is not caught cleanly by the catcher, the batter has the option to drop his bat and run to first base. It works basically like a drop-3rd strike, except it can be on any pitch during the at-bat. You may ask how is it scored? Well the official scoring in the books will go down as a fielder's choice, so it hurts the player's batting average but does help the on-base percentage. The irony is that it does not give the batter a stolen base on his resume. So what can this possibly change for baseball?

For the first time in baseball history a player stole first base thanks to the Atlantic League-MLB partnership rule changes! @ESPNAssignDesk pic.twitter.com/yj4FkcZg6O

The first thing I think of is that speed players will now have an advantage, players such as Billy Hamilton, Terrance Gore, and Jarrod Dyson could now be more of an asset to a team. We all know Billy Hamilton can steal anything but his biggest issue as many joked is that he cannot steal first base. Imagine Billy Hamilton flailing at a curve on the first pitch of the at-bat and it skips away a bit from the catcher and all of a sudden Hamilton is on first ready to go to second. This can be a huge advantage to speed players and could possibly affect how teams may even start to build their teams.

What could be a huge domino to this new rule is how catchers use their energy more often. You see that with no one on base and less than two strikes a catcher is not as likely to sacrifice his body on a ball in the dirt. They try to backhand the pitch and save some of that effort for a two strike count or runners on base. Catchers do not have the luxury of sitting back and allowing those pitches to just get past them due to this new rule. Catchers will now have to be on their toes for every single pitch of the game, making them work harder and wear them down even quicker in some games.

So catchers may have to be more aware on a more consistent basis, but would this new rule change the way teams attack hitters? Do you risk calling more curves and sliders to hitters knowing that if any of these pitches did happen to skip away you can add runners on base for every single one. I could see teams and pitchers potentially shying away from anything but a fastball especially earlier in the count, which obviously is an advantage to the hitter. It will definitely be interesting to see these pitchers and how they decide to attack hitters on a more consistent basis.

What could stealing first do for the game to make it more enjoyable? Well it can do what MLB has been trying to do for years and make the game more exciting. On any pitch of the game something can happen. That can happen now but how often does every pitch get put in play, but now any pitch can lead to getting a runner on base. It can definitely lead to more offense, more chances to put runners on base and like I mentioned earlier it can lead to more fastballs to being thrown to each hitter. If they want to keep people at the stadium and those watching at home more engaged and eager for every pitch then MLB can seriously consider adding this as a normal thing.

What do you think? Should the MLB really consider allowing players to steal first base?