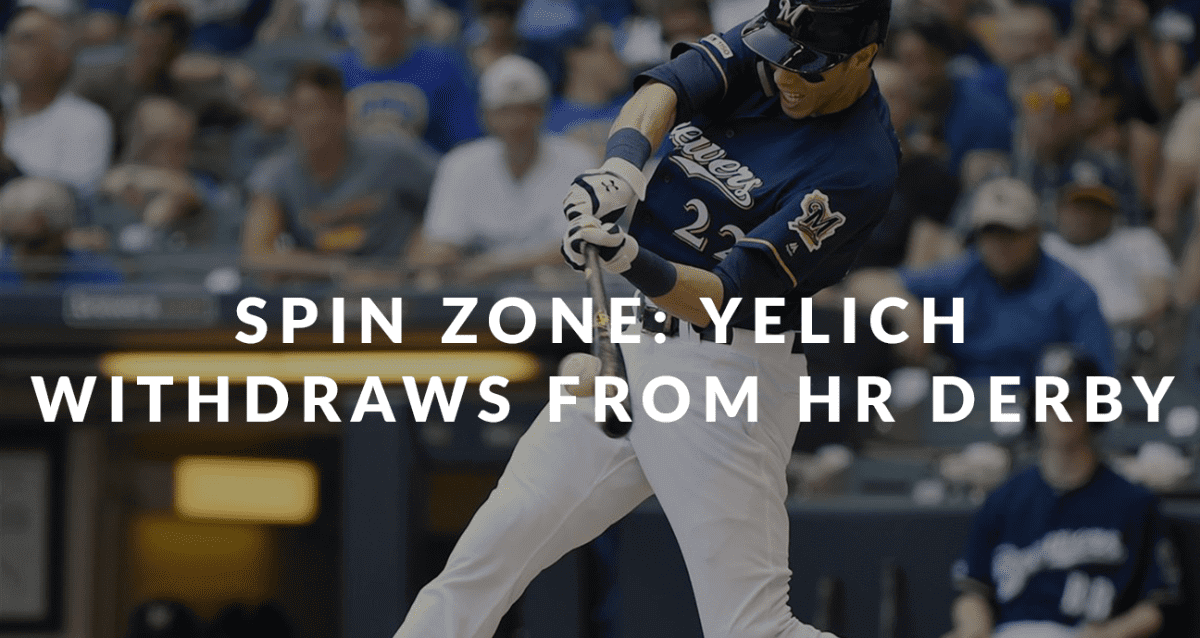 The date was Monday, July 8th. I messaged a group of Routine bloggers that I was going to start writing an article about Yeli pulling out of the homerun derby. My naÃ¯ve, and good-intentioned self was greeted with an uproar of laughter (via group chat). Apparently "pulling out" in any context is just as laughable as when you would convince someone to join the "pen 15" club in grade school. Nonetheless, I dismissed myself from the group chat and took my embarrassment induced energy to the keyboard.

Christian Yelich *pulling out* of the homerun derby is neither laughable, nor disappointing. In fact, it's quite the contrary. This decision is the validation that Brewers fans needed to confirm their insecurities: Milwaukee is still his number one.

This may come to you as old news by now, but Yelich tweaked his back in a game against the Pirates, and woke up the next day knowing the derby wasn't in the cards. A disappointed Yelich has been appearing in interviews and expressing his condolences to all of the people looking forward to watching him. As a Brewers fan, the sight of our MVP being upset is contagious, but I'm demanding that you reevaluate. You see, the king of Milwaukee's sports fandom (Sorry, Giannis. Christian is the OG) assessed all of his priorities and realized that the risk wasn't worth the reward. With last year's NL MVP and 31 home runs (and counting) so far this season, some might find comfort in wrongly rationalizing that he has nothing left to prove.

But they are so sorely mistaken. Big things were brewing.

The announcement of Yelich withdrawing from the derby came just days after he had the cops called on him in Pittsburgh. While he was practicing his derby routine at PNC Park to become accustomed to the pace, he hit bombs so far that they shattered the windows of the boats outside of the park. I haven't put much time into this, but if you see any boats on the Allegheny River named "Blessed by Greatness" or "Christian's Crusade", you'll be able to identity these narks pretty quickly.

On the Barstool Sports' podcast, "Pardon My Take", Yeli disclosed that in that practice, he hit 21 homeruns. I repeat: 21 lackadaisical home runs. Add in the adrenaline of a sold out ballpark and the excitement of his home run derby debut, and I think the winner is written in the stars. Fortunately for Vladdy Jr., the wrecking crew that is Christian Yelich will have to be postponed for another year.

Home run derby goers may be bummed to not see the Yeli magic in action, but in Milwaukee, Yelich has unintentionally given us the greatest gift reassurance. You see, in this unhealthy relationship metaphor, Milwaukee is the stagnant adult still living in the parent's basement, and Yelich is the significant other who just landed a fancy job in an even fancier building.

He's entirely too good for us, but exactly what we need. Our sanity craved a little reminder that he loves us just the way we are and is in it for the long haul. By sacrificing the opportunity to prevail as champion in yet another realm of the game, and pledging his allegiance (and health) to the Brew Crew, Yelich did just that.