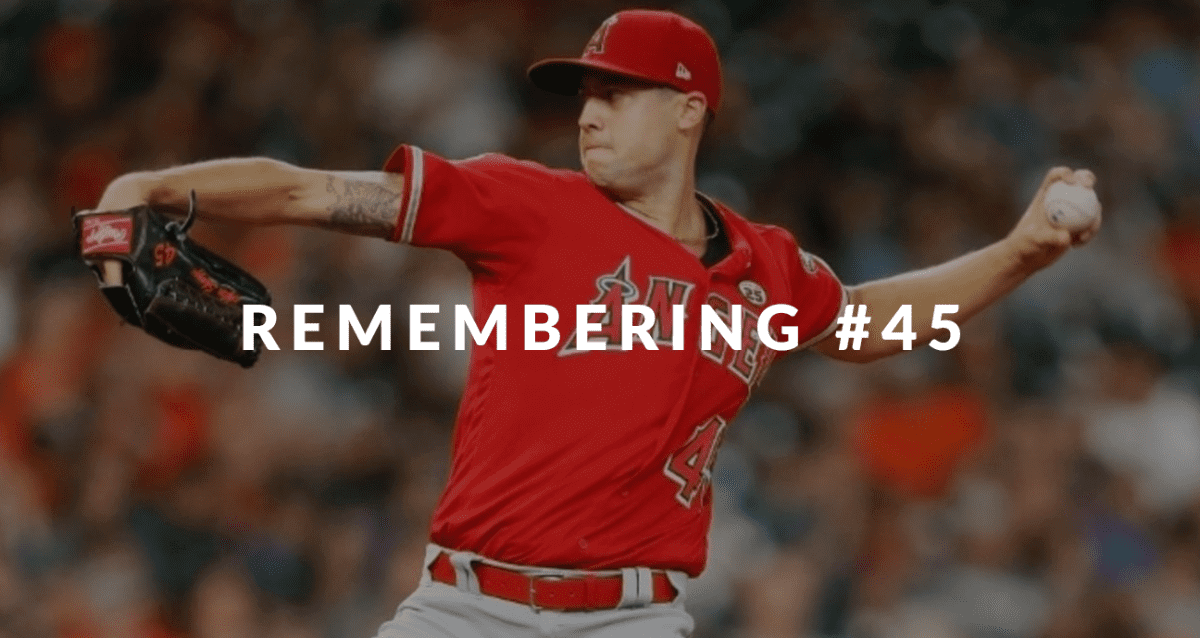 July 12, 2019 -- It was a typical Friday night for 29 teams in Major League Baseball but to the Los Angeles Angels, July 12, 2019 had a different meaning. It was their first game since the unexpected death of their teammate, Pitcher, Tyler Skaggs.

Tonight, we all wear 45. pic.twitter.com/IQ5pDzGSQD

Every Angels' player and coach was wearing the number 45 on their backs, below the last name of their beloved teammate. To start off the emotional night, every person in the Angels Organization toed the right-field foul line out of respect for Tyler Skaggs' family. Debbie Skaggs, Tyler's mother, was throwing out the first pitch. She was joined by Tyler's wife, Carli, and his stepbrother and stepfather. Skaggs' stepbrother sported Tyler's high school jersey, which had the number 11 on the back. This will come into play later in the night. Just as you would've expected, Debbie delivered a knee-high strike right over the heart of the plate. To what seemed like such a perfect moment, things get better"¦

The Angels were playing in-division rival, Seattle Mariners. The Angels led the game off with 4 straight hits, but the most significant, a Mike Trout blast to center. How far? Try 454 feet, 45, Skaggs jersey number, and he hit it "4" his lost teammate. Weird right??? It gets bizarre. The Angels plated 7 runs in the first inning, and went on to win the game 13-0. Today, July 13th, 2019, Skaggs would've been 28 years old. To add onto this perfect story, 7 runs were scored in the first inning and a total of 13 in the game. 7/13"¦. Tyler's birthday.

The highlight of the night though, came from the mound. Skaggs fellow pitchers, Taylor Cole and Felix Pena, threw a combined no-hitter, striking out 8, and allowing one base-runner via a walk. The last no-hitter in the state of California came in an Orioles-A's matchup in Oakland, on July 13, 1991, which is the day Skaggs was born. The combined no-hitter was the 11th in Angels franchise history, just like the number on the back of Tyler's high school jersey that was worn at the beginning of the game. Lastly, the no-hitter consisted of 27 outs, and one walk, 28 batters"¦ the night before his 28th birthday.

Baseball may be America's Pastime, but it can also serve as much more than just a game. On September 25, 2016, the world woke up to frightening news. Miami Marlins star-pitcher Jose Fernandez died following a boating accident early that morning. The following day, lead-off hitter Dee Gordon took the first pitch of the game right-handed to honor his fallen mate, then switched to his normal left-handed side. On a 2-0 pitch, the 160 pounder hit an upper-deck shot, for his first home-run of the year. Gordon had burst into tears before hitting second base, pointing his finger to the sky. Following the game, Dee Gordon said, "I ain't never hit a ball that far, even in BP"¦ I told the boys, if y'all don't believe in God, you better start. For that to happen today, we had some help."

Dee Gordon now plays for the Seattle Mariners. Following the game, Gordon chimed in again, "I got one thing to say and I said it 3 years ago and I'm going to be done with it. If you don't believe in God, you might want to start. I said it 3 years ago when I hit the homer for Jose. They had a no-hitter today. Y'all better start. That's all I got."

July 12, 2019 was much more than just a game for the Los Angeles Angels. It will go down as one of the greatest stories in baseball history.

From an Angel on the Mound, to an Angel in the Outfield"¦ RIP Tyler Skaggs #45.