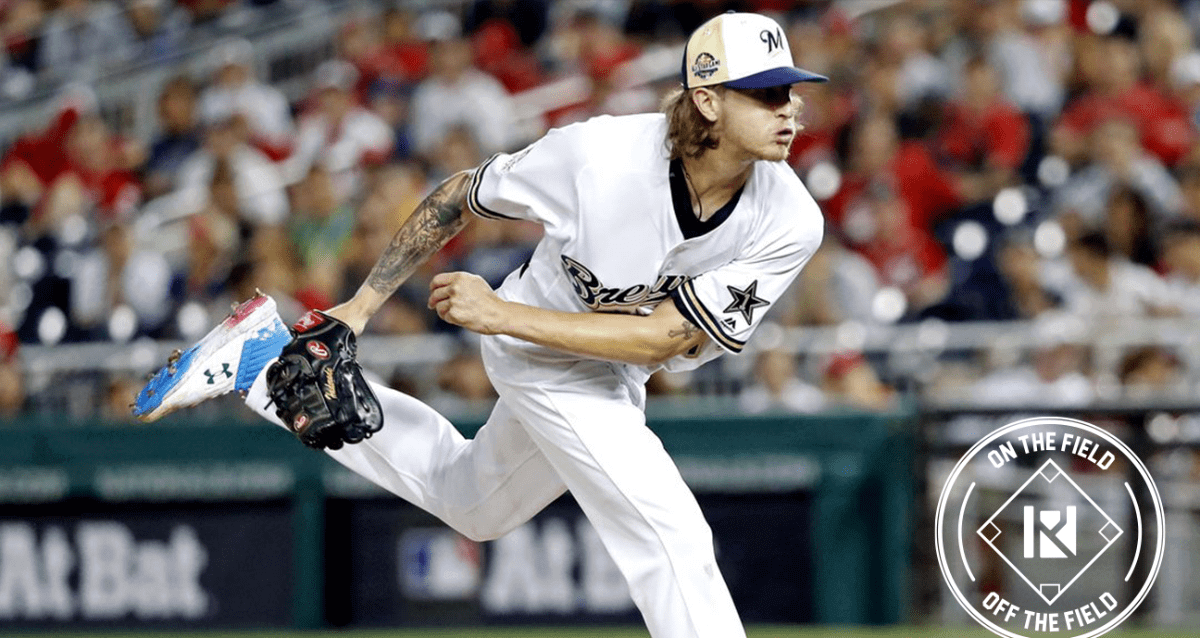 On The Field x Off The Field: Featuring All World Reliever, Josh Hader

Word on the street is Josh Hader's electric left arm is illegal in most places amongst this world.

The kid, who bursted onto the scene in the 2017 season, is one of the most shut down arms in the game today.

The reigning National League reliever of the year is coming into 2019 with a fresh arm, great lettuce under the Brewers cap, and a left arm to be reckoned with.

Who's ready for baseball? Just waiting...

The Nickname
"Haderade! It was a pretty easy one to go with, being an athlete and always consuming Gatorade, but it started in high school where I started to figure out how good my stuff was getting, and my teammates and friends would say 'HADERADE' as I walked down the hallway. Routine also has a dope Haderade shirt, I saw that in the team shop and recognized its beauty."

Walk Out Jam
"Renegade by Styx. Me and my buddies were playing MLB the Show when I was in the minors and I was like talking with them about a song I can use and have it pump me up and such, and next on the playlist, I hear Renegade, and I was like, 'man this is it!', and it gets me so fired up!"

The Grind
Offseason - "Workout regime is Monday, Tuesday, Thursday, and Friday. Usually a ton of lower half and core work. Keeping the lower half strong and ready is crucial."

In season - "Not so exciting. I have a regime I stay on, but in season it's primarily an 'all feel' kinda thing. If my arm feels good, it feels good, if not, I work to get it ready. Being a reliever my number can be called on at any time."

Superstitions
ï»¿"No real superstitions here! As a reliever, I never know when I'm coming in so it's not a consistent playing field, so I can't really say I have one. I keep Renegade as my walk out music because it works for me, so maybe that, if anything. But in the minors, starting in 2014, as a starter, I did have this one Routine shirt I wore under my jersey every game. That was more of a superstitious thing."

Favorite Game Day Drip
"I just began to dabble in the LuLu Lemon workout stuff; I've always liked wearing Routine stuff for warm ups and stuff, but in game, I'm all Under Armour and Legendary Whitetail."

Favorite Off The Field Fashion
"Under Armour stuff! Love it. The T Shirts and overall workout/athleisure gear is consistent. In season, while traveling we have a bit of a code so I go with a lot of polo shirts from Mizzen and Main, great performance wear but also classy. I think it honestly might be Phil Mickelson's brand. It's right up my alley, especially because it's still very laid back."

Thank you Milwaukee for all your support! We couldn't have done this with out y'all. Honored to be apart of this team. This is just the beginning of something special. ðŸ¤™ðŸÂ¼ #CrewRunsDeep

Off The Field Hobbies
"I really enjoy video games. Big video game guy for sure. I love hunting. Shooting my bow. Heading to the range to get some shots off is stress relieving for me. As much as the traveling city to city stuff is cool, it's nice to be alone with my friends and out in the woods or on the water. Also just picked up golfing. Not very good at it, but I enjoy the hobby now."

Coolest Thing Accomplished On The Field (so far)
"I would have to say, Game 163 at Wrigley. That was so much fun. Going through the long season with dudes I consider family, and move on in the postseason which is such an incredibly tough task, was amazing."

The Special Part Of Your Lifestyle As A Ball Player
"There's so much opportunity through baseball. But I'd say my favorite is going from stadium to stadium, city to city, meeting young fans and having the ability to impact them positively. Some kids tell me how it made their year or something when I take a picture with them or sign an autograph. That's just so amazing to me. I could meet a kid who's at his first ever ball game, and that could be the reason he falls in love with baseball, and if I can make that better, I want to."

ï»¿While on the phone with Josh Hader, I was able to really get to know the guy behind the #71 Brewers jersey, and shut down left arm. The kid has a bright future in the game and impacting those around him. A part 2, with Josh, is soon to come, hopefully at a ball park! Get to know the young gunner more, and enjoy!