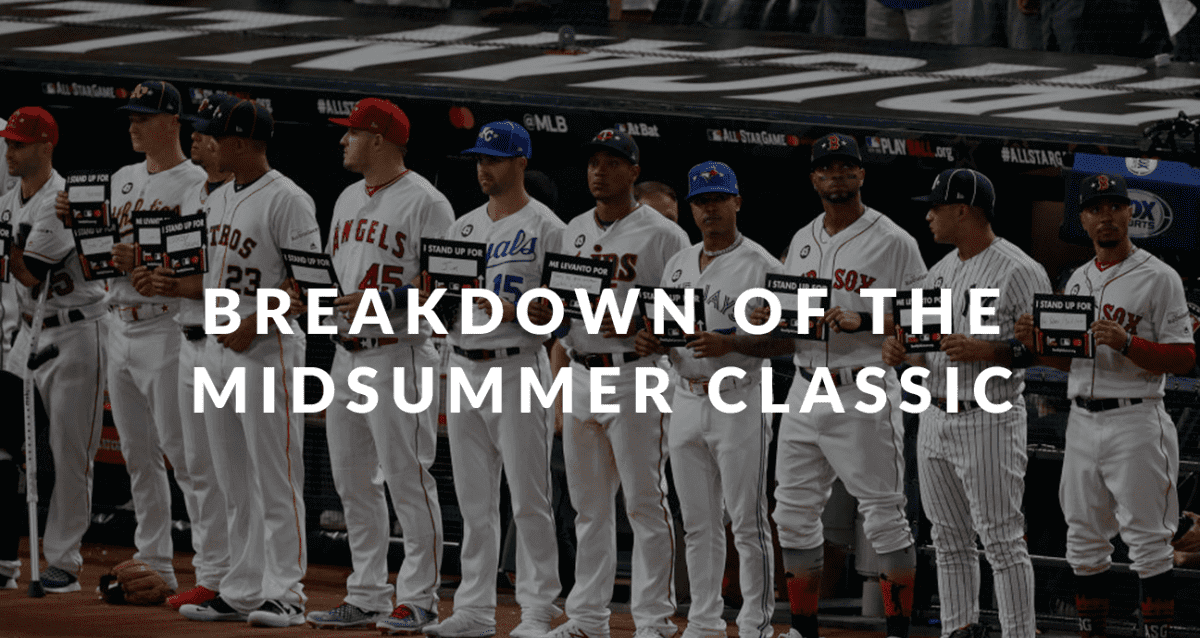 Breakdown Of The Mid-Summer Classic

Breakdown of the Mid-Summer Classic

Every player's dream is to make the All-Star game, just one time. Being able to call yourself an All-Star puts you into elite company in the baseball record books. The sad part is, not everybody can be an All-Star as there is only 32 spots on each roster for the two teams.

The Mid-Summer Classic, or The All-Star Break, really puts on a show for the fans of baseball. At least one player from every ballclub will be represented, and at times there is 5-6 players from one respective club. While the All-Star festivities such as the Selection-Show, Red-Carpet Show, Celebrity Slow-Pitch Softball Game, Home-Run Derby, and All-Star Game highlights the biggest faces in baseball, there is however a sense of frustration that comes from fans and even players. All-Star Snubs. All-Star Snubs at times receive as much recognition, if not more, than an All-Star Selectee. Fans and analysts put together the most descriptive and detailed arguments on why their favorite player, or hometown player is deserving of such. Being a huge baseball fan myself, but also a realist of the game, it's very aggravating when you see a guy in the top 5 of their respective categories and get no recognition, or when a player misses a significant amount of games prior to the All-Star break, get healthy 15 games before, and make the All-Star Team.

AMONG ALL AL POSITION PLAYERS:

Yankees lineup with the absence of GianCarlo Stanton and Aaron Judge for most of the 1st half of the season. Voit definitely did his fair share of damage hitting .280, 17 HR,

I personally would like to see a limit put on how many All-Stars can be named via Popularity Vote OR I would like their to be eligibility requirements that must be met to be in the All-Star Game. The main reason I would love to have one of these changes is so players with less of impressive stats or players with few games played aren't selected. I feel like the honor of being an All-Star is diminishing in terms of what the "All-Star" means. An "All-Star" is a term used to describe "outstanding performers."

My suggestion for All-Star voting would allow 3-5 players per team be selected via popularity/fan vote and the rest be selected via committee based purely off of that year's stats. Why do I suggest this? I suggest this because an All-Star appearance is supposed to be a sense of accomplishment or achievement. So, the players that have short "primes" of their career should have a shot to be an All-Star in those years if their stats are deemed good enough. There's a reason an All-Star game happens every year, to acknowledge the exceptional play of THAT year. I think nowadays people take past achievements of players and stats into consideration when voting. I hope that if these changes were ever to be made, the committee would honor the players with excellent stat lines because too many great players go unnoticed.