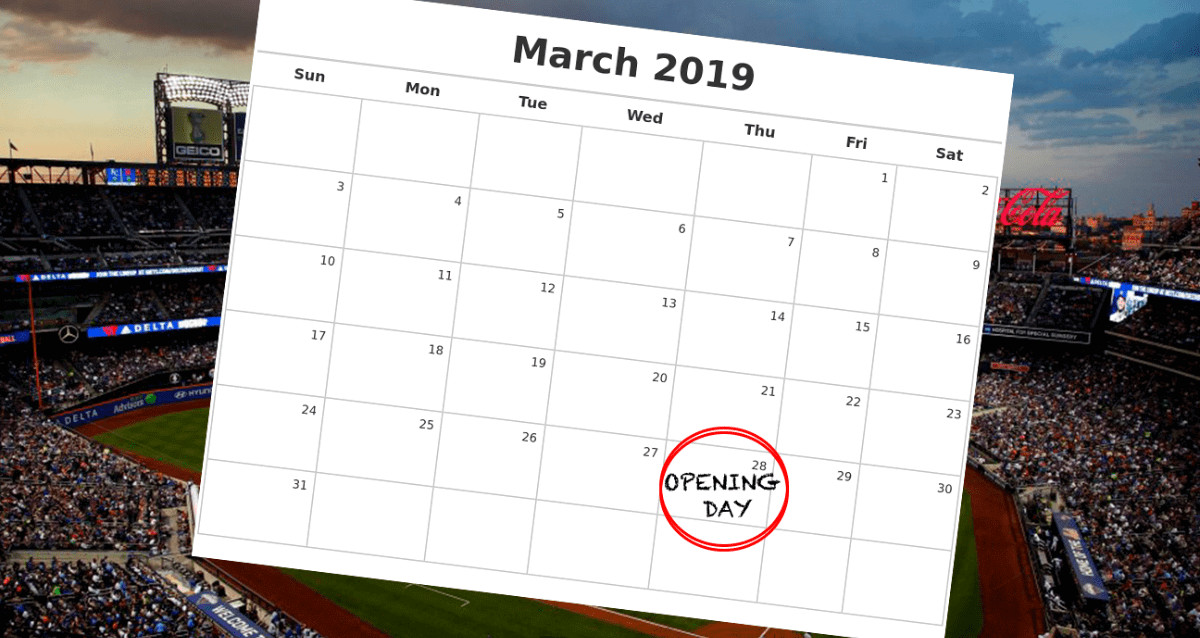 Following a phenomenal 2018 season where we saw new teams gain a lot of traction toward building highly contending clubs, where we saw some of the most incredible offensive numbers that we've ever seen, and where we saw a pitcher have arguably the greatest season in big league history while almost having a losing record. (Sorry Jacob, this year the Mets at least have a viable lineup...or so it looks.)

Baseball is a game of surprises. We see a new star born every year, and it's such a beautiful thing. The new stars coming to the forefront have also began to grow the game we love, more and more. The MLB saw a $10.3 billion revenue for the 2018 season, again setting a new record. (Forbes) The game is continuously growing, and we have a lot to look forward to, starting with...

In 2018, we saw Jacob DeGrom and Blake Snell respectively win the Cy Young Awards for their respective league. When the season began, few saw DeGrom being this lights out, and even fewer saw Snell develop this quickly.

This upcoming season, watch out for these six names. (3 AL, 3 NL)

Jack Flaherty, STL - A stud. Young gunner. Lots of upside and incredible upside. Pitching on a very talented Cardinals team will help him grow and excel a ton.

Walker Buehler, LAD - Flame. Thrower. We saw Buehler's talent as he carried a staff usually anchored by all time great (Kershaw) all the way to the world series. Watch Buehler take the next step and contend for the Cy Young.

Kyle Freeland, COL - Another young stud. Born and raised in Colorado, the kid loves his team and the game of baseball. Freeland showed a ton of upside in 2018, and the young lefty seems poised to make a splash in the NL West in 2019.

James Paxton, NYY - A supremely talented lefty who seems to just be hitting his prime. Being on a very high powered Yankees club will bring the best out in The Big Maple; watch out for him contending for some end of season awards.

Jose Berrios, MIN - A hard throwing, young righty, who really began to come into his own in the bigs in 2018. You never really know what to expect with the Twins, but if they succeed, it will be behind their ace, Berrios.

Shane Bieber, CLE - Another dude who began to emerge onto the baseball landscape in 2018. Bieber showed us a lot to look forward to, potentially being the next young arm to take over the Indians staff if they decide to dump Bauer, Carrasco or Kluber for a bat.

ï»¿9. Who Will Bring Some Much Needed Swagger To The Field?

ï»¿Swagger can be perceived in fashion terms, or just carrying yourself with a supreme on the field confidence. We've seen Bryce Harper play this way for years, and last year Alex Bregman really became a household name with an incredible year statistically, and showed it with how much swagger and fun he brought to the Astros team in 2018.

A name to look out for in this genre will be... (drum roll please)

Swanson while being an exceptionally swaggy player on and off the field by his persona, is also still coming into his own. Watch in 2019 for Lieutenant Dans (as he goes by on Instagram) to have an all star esque year while also being a crucial part of a contending Braves ball club.

Chicks dig the long ball. It's a scientifically proven fact. (or so it should be.)

Now for the surprise name...

Don't be surprised to see players like Bryce Harper, JD Martinez, Christian Yelich, etc; all push 40+ homers as well, but these guys are poised to absolutely show out this upcoming season.

TBT â˜„ï¸ÂÂÂâ˜„ï¸ÂÂÂ I miss that already

7. Two Former MLB Stars' Kids Will Be All Stars In Their Rookie Campaign(s).

Hot take? Not so much, but we as baseball lovers, are looking forward to the debuts of Vlad Guerrero Jr. and Fernando Tatis Jr.

These two kids have incredible potential, and can both be spark plugs for two teams who aren't predicted/projected to do so hot in 2019. The Padres (Tatis Jr.) are trying hard to make some decent moves and build a foundation for long term success, as they began by signing Eric Hosmer last season, and now going into 2019, Tatis Jr. will have some big opportunities on his plate.

We've all seen the incredible footage of Vladdy Jr.'s light tower power and unreal bat speed, as well as his cheat code-like stats. 2019 is a chance for the prodigy to become a household name, like his pops.

The season is officially over but that'll never stop me from training. Check out how I #STAYINTHEGAME only at #MLB9INNINGS!! Download #ad

Nothing sounds incredibly far fetched with this guy. Modern day Mickey Mantle some say. But, .350 is achieved few and far between, especially when you're constantly pitched around, but I think this year Trout will be next-level ridiculous. .350 40 and 100. But let's be real, whatever this guy does next, won't surprise us. What a talent.

What a memorable couple of days. Thank you for the support and love. And thank you @3n2sports for the spikes #allstargame #P3baby

Not much to commentate here, but watch out for these 4 guys to be absurdly good, this year. 20+ wins, and a lot of new plaques for their collections.